"For the past 13 or 14 years, all the electrical work, from rough-in to finishing work, has been done by the 804 retirees. They are an integral part of what we do."
- Darrell Bauman, Habitat WR Build Manager

Since 2005, members of the IBEW Local 804 Retirees Club have been volunteering their services as licensed electricians for Habitat for Humanity WR home builds. They’ve helped over 65 families experience the joy of owning their own home. 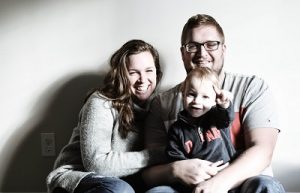 Jane Bleijerveld has noticed a big difference since her family moved into their new Habitat for Humanity Waterloo Region (WR) home.

“I feel super blessed and thankful to be here, to have a place that’s a safe haven,” she says. “I love that we can enjoy things like just being able to sit on the porch in the morning with a book, or take our son to the park provided by Habitat. Just having a place where I can watch my son jump around, and make memories means so much.” 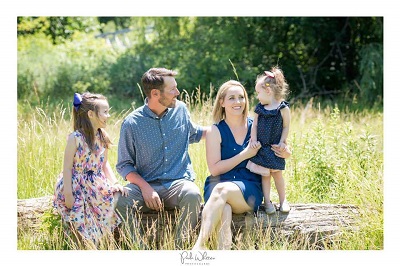 Fellow Habitat WR family member Paige MacCharles has had a similar experience. “My husband and I feel more accomplished, more stable. It’s made my kids happier – they love having a house, and being in a neighbourhood with tons of other kids they can play with.”

“Families in stable homes do better mentally and physically, and the kids especially do better in school,” says Habitat WR Build Manager Darrell Bauman. “Low income families can experience a lot of stress, and this can impact sleep and overall health.”

For IBEW Local 804 Retiree Club volunteer electrician Doug Richards, the happy outcome is a big part of why he contributes. “To me, that’s very rewarding, just the fact that we’ve done something for somebody.”

Life at home wasn’t always so pleasant for Bleijerveld’s family. The rented apartment she previously shared with her husband Dylan and one year-old son was affordable, but not much else.

“Where we were living, there was a mold problem, and we’d tried to talk to the landlord about it but were ignored,” she says. “There were regular domestic disputes in the same complex which, almost weekly, required the police. We felt hopeless and so discouraged, especially when we found out we were pregnant. We were desperate to get out!”

But with all of their income going to pay student debt, car payments, and basic expenses, there wasn’t much left over to save for a down payment on a house.

For MacCharles, a former personal care worker headed for a career in nursing, things had initially looked brighter until their second daughter, Abigail, was diagnosed with cystic fibrosis. “My husband Russ and I decided I would stay home to be her caregiver, because day care would mean she would get sick more and end up in the hospital a lot more. But that decision set us back financially.”

Cystic fibrosis primarily affects the lungs with ongoing infections, and exposure to normal colds and flu can be devastating. There is no cure, and the best hope lies in a lung transplant. Until then, Abigail needs attentive care which currently involves multiple medications and breathing treatments twice a day.

For these families and others like them, Habitat WR gave them a chance to overcome the financial barriers to home ownership. A rigorous screening process, which includes providing a minimum of 500 hours of volunteer time, identifies families who will make good homeowners.

It’s important to note that the families who are part of the Habitat for Humanity programme don’t get their houses for free. Habitat families don’t have to make a down payment or pay interest, but still need to pay the full cost of the mortgage.

“Mortgage payments with us are tied at 25% of a family’s income,” says Bauman. “But that stability and knowing what to expect for housing expenses allows them to plan.”

It’s part of what makes the program a success from everyone’s perspective. “We loved that it was a hand up, not a hand out, like their motto says,” says Bleijerveld. “We weren’t just given the home, that’s not what we needed. The most important things in life are the things you need to work the hardest for. And we found that we needed to invest in it to truly appreciate it.”

Even though the homes are fully repaid, running the Habitat WR program is still costly. While overhead for the program is covered by the Habitat for Humanity ReStores, having volunteer labour to build the homes is essential.

“Ensuring there’s enough funding is always a challenge,” says Bauman. “In the Waterloo Region, which is very prosperous, one of our biggest challenges is getting land for the homes.”

Everything from the ground up is done by volunteers. An experienced core team of volunteers helps teach the rookies, some of whom are Habitat families, but many of whom are people from the community who want to help.

“You don’t need to be handy to contribute,” says Bauman. “It’s also a very fun place to volunteer.
People are surprised by how much of a sense of satisfaction they get – they remember the exact homes they worked on.”

“The other volunteers were super patient with me, and taught me so much,” says Bleijerveld. “They even helped me face my fear of heights.”

Bauman says that the electricians of the IBEW 804 Retirees Club make a significant contribution. “For the past 13 or 14 years, all the electrical work, from rough-in to finishing work, has been done by the 804 retirees. They are an integral part of what we do.” 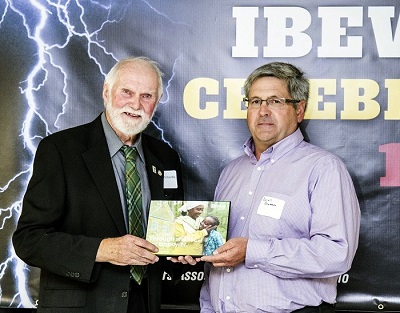 “For safety and quality reasons, we ensure that the volunteers who work on systems like the electrical, gas, and plumbing are licensed tradespeople,” Bauman continues. “They have decades of experience, and want to do good work. They like to contribute to giving a family, especially a child, a stable home to call their own.”

“It’s so rewarding,” agrees Richards. “I particularly like having the chance to get back on the job again with guys I’ve been working with over the years. We all get along and we like to get the job done.”

The IBEW 804 Retirees Club works most of the year round. “There are 16 or 18 of us in the retirees club, and a typical group of us on a build site on any given day is about 12 to 15, depending on schedules. There’s always a group that turn up and go out of their way to get the job done.”

Some of the retirees from the northern part of Local 804’s jurisdiction have also been doing work for other Habitat builds in Wiarton and Cape Croker.

While every day is different according to Richards, there always needs to be planning and coordination. “When we go there in the morning, I’ll go through the electrical layouts, ensure all the materials we need are there, and start assigning specific tasks out to the guys.”

But when Richards first started volunteering, getting essential systems installed safely wasn’t always a sure thing.

“There was a local contractor who was going to do one of the houses, but he wouldn’t look at the electrical drawings,” says Richards. “He showed up with a crew of people and just started doing things, but when they left nothing connected up right. We were asked to take it over, and we’ve been doing it ever since.”

“89% of Habitat families continue to volunteer in the community after their 500 hours are done.”

Fostering a Culture of Giving Back

Volunteer labour also results in one of the unexpected benefits of the Habitat program: showing people how good it feels to give.

MacCharles says that was something she was happy to learn. “Once you get involved, you really enjoy it. It was 500 hours of volunteer time, but we didn’t feel like it was work. Everyone at the ReStore and the build site was so nice, helpful, and supportive.They definitely make you feel welcome. It was all a great learning experience.”

“We get the community involved in volunteering,” says Bauman. “We get people mixing with other members of the community they might not ordinarily meet.”

For Richards, the social rewards are also important. “Because we’re retired, we can go during the weekdays because we have the time. Definitely I like working with guys I’ve worked with over the years.”

Bleijerveld was impressed by the atmosphere when volunteering. “I was awe-struck by the volunteer attitude – some were retired, some were working on their days off – I was blown away by how they all wanted to be there. They put so much love and dedication in, despite the harsh conditions of the weather.”

According to Habitat WR statistics, 89% of Habitat families continue to volunteer in the community after their 500 hours are done.

Building Happier Communities, One Home at a Time 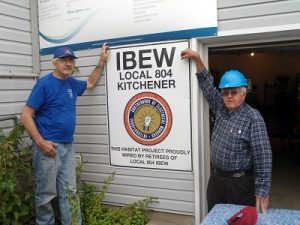 For families like Bleijerveld’s, the rewards of the program are profound. “I feel like I’m finally able to breathe,” Bleijerveld says. “We’ve seen such a decrease in our personal and marital stress level since we moved. I am daily filled with joy and thankfulness to be in this house and I feel like I can finally start focusing on being a good wife and mom instead of being ashamed and dispirited about the conditions of our living situation.”

Paige agrees. “It’s a great feeling- it makes a big difference when you help build the home you’re going to get – you work so hard and for so many hours, it’s great when the big day arrives. We’d lived in apartments for years, but they never felt like home, the way this place does.”

For Richards and the other members of the IBEW 804 Retirees Club, Habitat WR will continue to be a place to gather, drink coffee, work hard, and have fun. “It’s a very good cause. There are Habitats all over the place. If there are other Retirees Clubs who want to pick up on this, it would be great to see it expanding.”

—
There Are Many Ways to Help

Want to help out a Habitat for Humanity program in your area?

Find a Habitat program near you >