“We are happy to support this very positive initiative that will help local students, our schools and the community...”
- Wayne Crockett, Manager, ECA London

The International Brotherhood of Electrical Workers (IBEW) Local 120, and the Electrical Contractors Association of Ontario (ECAO) in London have a history of helping out electrical programs in area high schools. Now they are partnering with Klein Tools to donate 45 complete sets of top quality electrical tools to local high schools.

High schools in Ontario have been feeling financial pressure in the past few decades, and as a result many programs are being gutted or eliminated entirely. Unfortunately that means young people often miss out on a learning opportunity, especially when it comes to hands-on classes like shop.

In London, the electrical programs at three high schools are receiving a helping hand from the IBEW-ECAO partnership.

“I wanted to make sure that our students here in London have the proper tools to help them learn and work safely,” said John Gibson, Business Manager of Local 120.

How did the donations come about? It turns out that Local 120 has been donating electrical materials and providing recognition of excellence for a few years.

The three London high schools have electrical programs for Grades 10, 11 and 12. Every year, Local 120 gives an award to the best student in each school, as decided by the teacher.

“I really want to help support training and education,” says Gibson. “I know the schools don’t have a large budget and they have to make some difficult choices.” 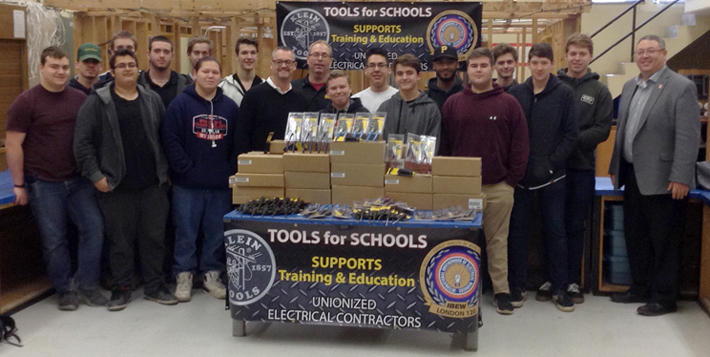 Gibson presenting Klein tools to a London, Ontario electrical class. Gibson is in the front row (4th from left). Instructor Keith Neil is behind him, with Principal Brandon White on the far right.

Back in the spring of 2017, Gibson was being given a tour of one of the schools’ workshops. The shop was set up with different project booths, in which the student had to do a wiring project, usually with lights and switches.

“I noticed some of the wire was really in bad shape, really kinked.” says Gibson. “It turns out that the Grade 12s get brand new wire, but because of lack of funding, the Grade 11s have to use the Grade 12s’ old wire, and the Grade 10s have to use really old wire from the Grade 11s. I thought that was really a shame so, I approached Mike Tilson (owner of Tilco Electric) and Gillivan, a wholesaler I know in the area, and purchased some new wire.”

But the school’s financial situation meant that even the tools were in bad shape.

“The instructor showed me some of the tools the students were working with, and I said they looked really old. It turns out they were – they were from back when the school was originally built in the 1960s.”

The tools were so old that insulation was worn off, and edges on cutters and wirestrippers were dull.

“I thought this was ridiculous,” said Gibson. When he shared his story with Wayne Crockett, Manager of the ECA London, Crockett agreed to help.

“We are happy to support this very positive initiative that will help local students, our schools and the community,” says Crockett.

Gibson continued to hunt down supporters for his new program. “I reached out to Kyle Williams at Klein Canada, and said I was starting a tools donation program with one of our contractors, and did they want to help out too. They said yes.”

“I really want to help support training and education,” says Gibson. “I know the schools don’t have a large budget and they have to make some difficult choices.”

Gibson has plans to expand the program to other towns in the London area, specifically Woodstock, St Thomas, and Strathroy. “But there’s no reason this program can’t go right across Canada,” he says.