"You are all true professionals and a pleasure to work with, your positive spirit is contagious and you have certainly raised the bar!”
- Ken Alonzo, Line Foreman, Central Hudson Gas & Electric

In March, a team of powerline workers from Thunder Bay’s Gridlink laboured for 14 consecutive days to restore power to Newbury and Westchester in New York State.

When the weather gets bad, most of us are happy to stay sheltered indoors. But that’s the time when powerline workers are called in to work.

In late February and early March, a series of three nor’easters in New York brought down heavy snow and freezing rain, resulting in downed trees and powerlines across the state. Crews from all over the US and Canada were called in to help restore power. By March 4, a team from Gridlink (members of the Electrical Contractors Association of Ontario) was on the scene. 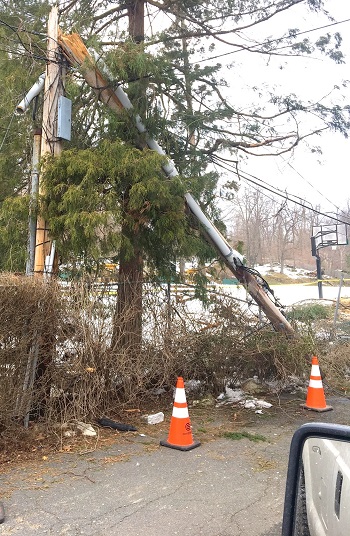 “When duty calls, we think of the elderly, of the families with kids that are going without power,” says Geoff Miller, Powerline Division Manager for Gridlink. “Over the time we were there, we worked in 21 different areas. Some people had been without power for weeks.”

Miller’s team endured long 16 – 18 hour days of heavy labour to restore power in the communities. The rewards were greater than any paycheck, according to Miller.

“Sometimes people would come out to give us coffee or doughnuts. If they’ve been without power for a while we get a lot of hugs and handshakes. Whenever we entered a restaurant we got a standing ovation from the entire room. One of my new crew members came up to me afterwards and said, ‘there’s no better feeling than this, is there?’ I told him there really isn’t.”

Miller pauses to reflect. “Although sometimes you’d hear a kid saying, ‘that’s what I want to do when I grow up’, and that feels good too!”

Officials from the local utility companies were also appreciative. Ken Alonzo, a Line Foreman with Central Hudson Gas & Electric, was assigned to accompany Miller’s team. He later wrote to Miller to express his thanks.

“I appreciate your safety culture and detailed work plans and especially your attention to detail!” read part of the letter. “It was a pleasure to have you back on our property helping to restore power so quickly to thousands of our customers…You are all true professionals and a pleasure to work with, your positive spirit is contagious and you have certainly raised the bar!”

“Anyone can work fast, but if you’re skipping essential steps to do it you’re gambling with your team’s lives and with public safety.”

A Reputation for Excellence 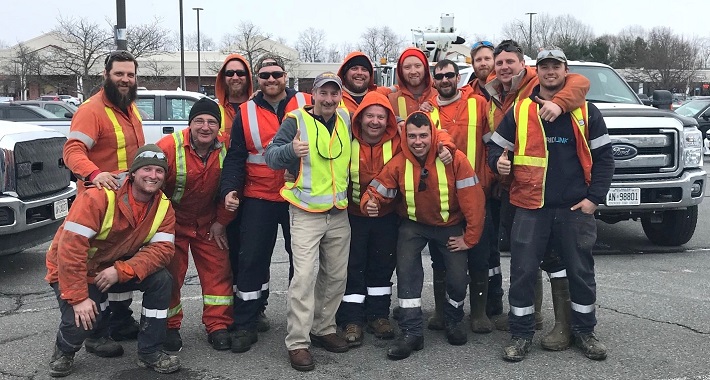 This isn’t the first time Gridlink has been called in to help out after natural disasters in the United States. “The first time was after Hurricane Irene in 2011, then in 2012 there was Superstorm Sandy,” says Miller. 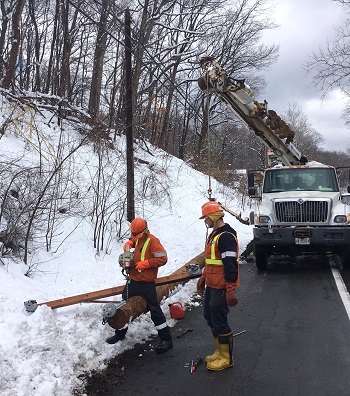 “We were brought down through the Mutual Aid program, and it seems we made a name for ourselves with the level of effort we were able to provide. We were asked to submit paperwork to pre-qualify should another disaster hit, so we did. They look for safety as well as on-time completion. Anyone can work fast, but if you’re skipping essential steps to do it you’re gambling with your team’s lives and with public safety.”

Safety is never far from Miller’s thoughts. “My biggest concern is definitely safety, especially in a disaster relief situation. You have people working at heights, weather issues, trees and branches that are ready to fall, damaged lines with power in them, roadway traffic, and sometimes even members of the public who just want to take a look. You have to constantly keep your eyes peeled for new dangers.”

Keeping his workers safe is Miller’s top priority. “These men become your friends, and you get to know their families. Before we left I spoke with a number of their wives and girlfriends, and promised that I would bring their men home.”

Managing fatigue is an important part of Miller’s strategy. “I check in with them a lot, switch them up whenever I think it’s needed. If I see someone looking a little tired in the morning, I will place them in suitable tasks.”

The emphasis on safety is also a priority for the union that represents the powerline workers. Miller and his team are all members of IBEW Local 402 in Thunder Bay.

“I am extremely pleased that we have such a great partnership with Gridlink,” says Local 402 Business Manager Glen Drewes. “I am proud that powerline workers from our area were able to come to the aid of people in need.”

Gridlink is well versed in the rigours of powerline construction. In 2015 – 2016, Miller’s team completed the Beardmore 320-pole power generation distribution line that took power from the Twin Falls and Long Rapids dams, connected them, and continued south. The line tapped onto the 115kV line of Hydro One, and covered 30 km of treacherous Canadian Shield terrain.

“I call it the ‘rock and swamp’ tour,” quips Miller, then commenting on the terrain, adds, “We had to build temporary log roads over swamps for the equipment.”

Over the 8 months it took to complete the project, Miller and his team endured heavy snow drifts of six to seven feet, and stretches of severe cold with temperatures dropping to -45°C.

Creating a Culture of Safety

The emphasis on safety is a cornerstone of Gridlink’s culture. Over 80% of the employees are certified as Health and Safety Officers with the Infrastructure Health and Safety Association (IHSA). Earning the designation involves passing eight different courses, and demonstrating experience for five years.

“We are one of the first firms in North America to earn IHSA’s Certificate of Recognition (COR) certification in October 2012. We have also won the IHSA ZeroQuest Sustainability Award,” says Miller.

“We like to hire people right out of college if possible, because we can start them off with safety training our way. We’ve found that new hires from other places don’t always want to follow the steps. You have to start by learning the safe way, then get faster with practice.”

But as Miller’s team has demonstrated, safe doesn’t have to mean slow. “Our projects are consistently on-time and on-budget.”

All in a Day’s Work

For the people of New York state, Geoff Miller and his team are heroes. For Miller, however, it’s about the people who have been suffering. “We have heavy snow here, but certainly not the kind of hurricanes or flooding I’ve seen down south. When you see the devastation, you really feel for them.”

In the end, it’s all about being there for others. “I just like to go down there and do my best for people.”