“I love doing a job from start to finish and seeing how it all comes together.”
-Dana Whyte, Tech, level 2, Network Cable Specialist Apprentice

Sign up now and earn while you learn in an exciting career.

Dana Whyte looks around at the stunning Toronto hotel where she has played a role in helping ensure it is wired to perfection.

As an apprentice Tech, level 2, she is thrilled with her career choice to become a network cable specialist, the fastest growing trade in the electrical sector.
“I love doing a job from start to finish and seeing how it all comes together,” she says.

The demand for this job in the Toronto area has exploded due to a number of factors, including more people working from home and evolving technology.
“I was looking at a new career and initially looked at electrical but decided that the NCS was something that was quicker to finish,” she said.

“I showed up at the union hall with work boots and was hired that day,” she said. Dana said she did her research before applying which helped with her successful application.

The apprenticeship, which lasts approximately three years, allows you to get paid while you learn. A no brainer for Danam, who was also impressed with the focus on training and safety.

“My employer, Guild Electric, and the IBEW have always had a focus on safety since day one. As a registered apprentice, there is always someone to watch over you,” she said.

As a skilled trade within the construction sector, it involves working with your hands and, while challenging, is a great fit for women.

“It’s a really female friendly trade. I would definitely encourage any women who are looking for a career to consider the NCS trade,” she said.

Not only is she close to reaching journeyperson status, which involves even better pay, but the benefits package offered by IBEW is a major advantage.

“If I started a trade right out of high school, my pension would have meant I would have been in a much better place,” she said.

Being organized, flexible and willing to work hard are traits she says are key to being successful in this exciting career.

“If you are hard working and willing to learn you will move up quickly,” she added.

Michael Mukupa always had an interest in technology and liked the idea of working with his hands.

“I learned about the expanding demand for network cable specialists and the idea of working in a low-voltage,” he said.

“I am right now working on a new tenant office doing preliminary work to prepare the running of cable,” he said.

He said it’s a career with endless possibilities and provides great personal satisfaction.

“It’s so exciting to see the whole job unfold before you; it’s like a work of art. It’s also so satisfying to walk past a building and think I was part of making that happen,” he said.

Apply for a Network Cable Specialist position in the Greater Toronto Area today at www.ibewcomms.ca. 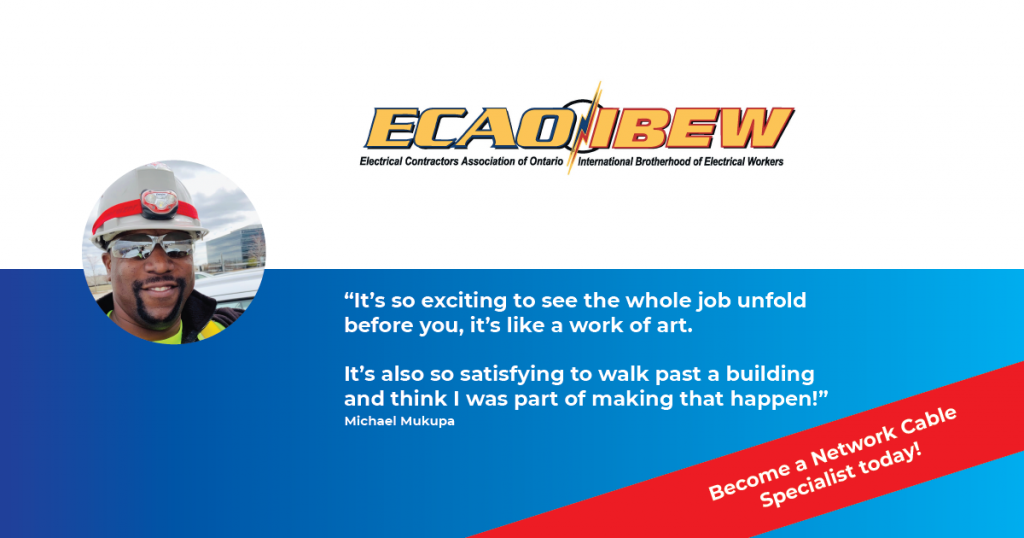