Ontario Premier Doug Ford and Monte McNaughton, Minister of Labour, Training and Skills Development visited IBEW Local 105’s Training Centre in Hamilton last week. They met with some of the Local’s talented apprentices and licensed journeypersons to learn about the high training standards provided at the centre for those entering the electrical industry. 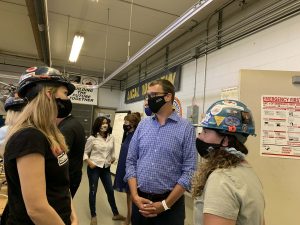 Among the many industry representatives in attendance were James Barry, Executive Secretary Treasurer of IBEW CCO, Graeme Aitken, Executive Director of ECAO and Steve Fox, Business Manager of IBEW Local 105. Steve Fox was invited to speak at the Premier’s daily press conference which was also held at the training centre. Fox thanked the Premier for his interest in skilled trades and investments in the construction industry to ensure Ontario has the necessary infrastructure to strengthen our economy.