“As an ECAO contractor, we’re very concerned about safety. We do a lot of commercial and industrial work, and construction sites can be extremely dangerous at the best of times. We love that our electricians get excellent safety training through their IBEW membership.”
- Johnny Peto, Co-owner, Tucker Electric

Jay Lebert, a journeyman electrician with Windsor’s IBEW Local 773, was on hand to rescue a non-union pipefitter knocked unconscious by a beam and left unable to breathe. The pipefitter made a full recovery. 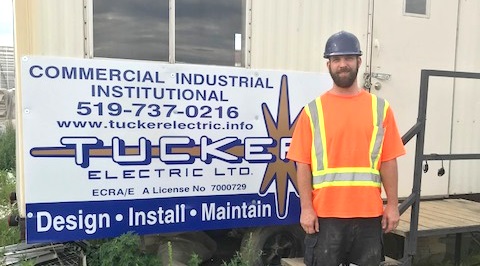 On the morning of June 22, Jay Lebert was tying in an electrical panel in a new commercial greenhouse when he heard a loud bang.

Down a nearby aisle, Lebert looked up to see a young pipefitter crushed between an aerial work platform and a ceiling beam. The worker appeared to be unconscious.

“I’m very grateful that I had the safety training to be able to help,” says Lebert. “IBEW is very diligent about training and safety, and that gave me the tools to save him.”

Johnny Peto is the co-owner of Tucker Electric, the Electrical Contractors of Eastern Ontario (ECAO) member that employs Lebert.

“It’s an honour and a privilege to have someone like Jay working with us,” says Peto. “I was really pleased but not surprised to hear that he was able to keep his composure, follow the procedure, and step up to help out a fellow tradesperson. I’m glad to see that the situation worked out for everyone.”

Quick Response Prevents an Accident from Becoming a Tragedy

As a member of IBEW, Lebert had taken a variety of safety courses. This would prove essential, as the work site was a 17-acre greenhouse facility, and no one else had heard the impact of the crash.

“I climbed up into the basket to free him, but he was pinned over the controls and I couldn’t get at them. He was definitely unconscious,” Lebert says.

The pipefitter had been driving the elevated lift backwards out of the aisle. He hadn’t seen the ceiling beam which struck him in the back and knocked him forward over the control panel, pinning him. The Ministry of Labour is currently investigating the accident.

Lebert continues the story. “I climbed down and used the emergency ground-level controls to lower the basket. The guy immediately collapsed, and I could see that he wasn’t breathing. I was repositioning him to start CPR, when he took a big gasp. He was still unconscious but at least he was breathing. But I was really worried because he’d been without air for two or three minutes.”

No one had heard Lebert’s calls for help. It wasn’t until Lebert sounded an emergency air horn that other workers came running, and called 911.

“The greenhouse was so big that the ambulance took a while to arrive,” says Lebert. “When the paramedics put him on the stretcher, he seemed to regain consciousness and started talking, but it was all gibberish – he wasn’t making sense.”

“He came over and thanked me, and told me about his family, and how happy they were.”

“I was a bit shook up after the accident,” says Lebert. “I was grateful that Tucker gave me the rest of the day off to cool down; it was a big adrenaline rush.”

Lebert later learned that the young pipefitter, who was very big and fit, had a lot of bruising but no broken ribs. “The doctors told him that if he hadn’t been in such good shape he would have been much worse off.”

After a three week recovery, the pipefitter is now back at the work site. “He came over and thanked me, and told me about his family, and how happy they were. I had to walk him through what happened, as he doesn’t remember much,” says Lebert.

A Culture of Safety is a Two-Way Street

Johnny Peto comments on the importance of safety on worksites. “As an ECAO contractor, we’re very concerned about safety. We do a lot of commercial and industrial work, and construction sites can be extremely dangerous at the best of times. We love that our electricians get excellent safety training through their IBEW membership.”

Foremen also do rounds at worksites, checking that procedures are being followed and that, for example, the electricians are drinking plenty of water if the weather is hot.

Some employers verbally encourage workers to follow safety procedures, but put so much pressure on them to get the job done quickly that they’re not able to follow through. Tucker Electric, as an ECAO contractor, makes sure to practice what they preach.

“We work very efficiently, but safely,” says Peto. “If someone feels something isn’t safe, we respect that and find another way.”

It’s a partnership that means work is able to done more efficiently, without any delays due to accidents and subsequent investigations. “We have a great track record,” Peto says, “and our customers come back to us again and again because of it.”